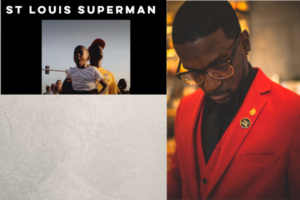 Bruce Franks Jr. has proven to be a voice for the mistreated, disenfranchised citizens of Missouri. He has dedicated

his life to public service to eliminate oppression through mentorship, social activism and political bipartisanship. Dedicated to changing the world, one life at a time, Bruce Franks mentors youth in his community. Through the teen mentorship programs, Franks has successfully mentored youth ages 14-24 on real-world practices and life skills. Filled with life experiences and stories meant to inspire, Bruce frequently shares his wisdom with the future leaders of the community.

Since the young age of six, Bruce Franks’ world consisted of violence, murder, and poverty. As a child, his nine-year-old brother was murdered in cold blood in their front yard, as a result of a drug dispute between neighbors. At that moment, a leader was born. This would not be the last time he would experience tragedy and at 34 years old, Bruce has found himself at more than 200 funerals.

On Aug 9, 2014 Michael Brown was murdered by Police Officer Darren Wilson, and Bruce would not be silenced.

He protested in the streets filled with tear gas and chaos, alongside other residents who were outraged by the abuse and disregard for black lives. He screamed and chanted in the name of justice, as hostile police officers forced his face to the concrete, sprayed his face with pepper spray, and cuffed his hands behind his back. Seeing him as nothing more than a young, angry thug, whose presence brought nothing but trouble. Despite being arrested and numerous threats for 400 consecutive days, Bruce stood on the front lines, demanding justice, and settling for nothing less.

And through the smoke congested streets, the citizens of St. Louis saw Bruce Franks for his true self: a leader desperate for justice and willing to sacrifice everything to achieve it. In September 2016, the citizens of the 78th district elected Bruce Franks to be their new State Representative. Defeating the incumbent with 76 percent of the vote, Bruce Franks fought his way to the top of the system. The 2016 election, like many instances in Bruce’s life, was not without complication. The city was forced to do a recount of the ballots, which had initially projected the incumbent as the winner. It was not until he officially challenged the city and demanded a recount, after learning that absentee ballots were cast inappropriately, that he was able to claim the seat that was rightfully his. To some, it was an unbelievable victory. To Bruce and his community, it was a victory that had been long overdue. Support for Franks’ candidacy was not hard to come by, as he and his family had been members of the community for over two decades.

As a true St. Louis native, Bruce understood the issues that plagued his city. He has seen the homeless who slept at nearby bus stops and inhabited the sidewalks of the city’s most prominent downtown areas. He watched as drugs infiltrated and destroyed his neighborhood, and as gun violence took the lives of children who dared play on their own front lawns.

During his first year as an elected official, Representative Franks has kept his promises to the people and has gone to war in the Capitol for human rights and black liberation. Once funded by former Missouri Governor Jay Nixon, Missouri’s Summer Job Program was created to satisfy a need within the state, where youth ages 16-24 were left unemployed. After the program’s budget was cut to $0, Bruce not only saved the program from complete elimination but got it refunded for over $6 million. He did so, through bipartisanship and his eagerness to reach across the aisle. He effectively convinced his Republican colleagues that his program effected not only his district but many low-income rural areas in Missouri that are often forgotten.

Bruce believes the best mobility is achieved through bipartisanship to move along his agenda, which is targeted on giving a voice back to the marginalized citizens of the state. He has since created bills to protect our most vulnerable: the children, the poor, the homeless, and the incarcerated.

Bruce Franks has found himself on the right side of history. A true progressive, Bruce Franks preaches for action, to liberate the oppressed. He speaks not only to inform but to inspire and encourage the youth of our nation, whose futures are at stake. He believes in the power that can come from enlightening our youth and proving that despite current circumstances, one can defy all odds and become the change that we’ve needed all along.

St. Louis Superman is a 2019 American short documentary film about activist, battle rapper, and former politician Bruce Franks Jr. It was directed by Sami Khan and Smriti Mundhra and was released by MTV Documentary Films. See trailer for the documentary film below. Conference attendees will have the opportunity to see the full documentary if they choose.